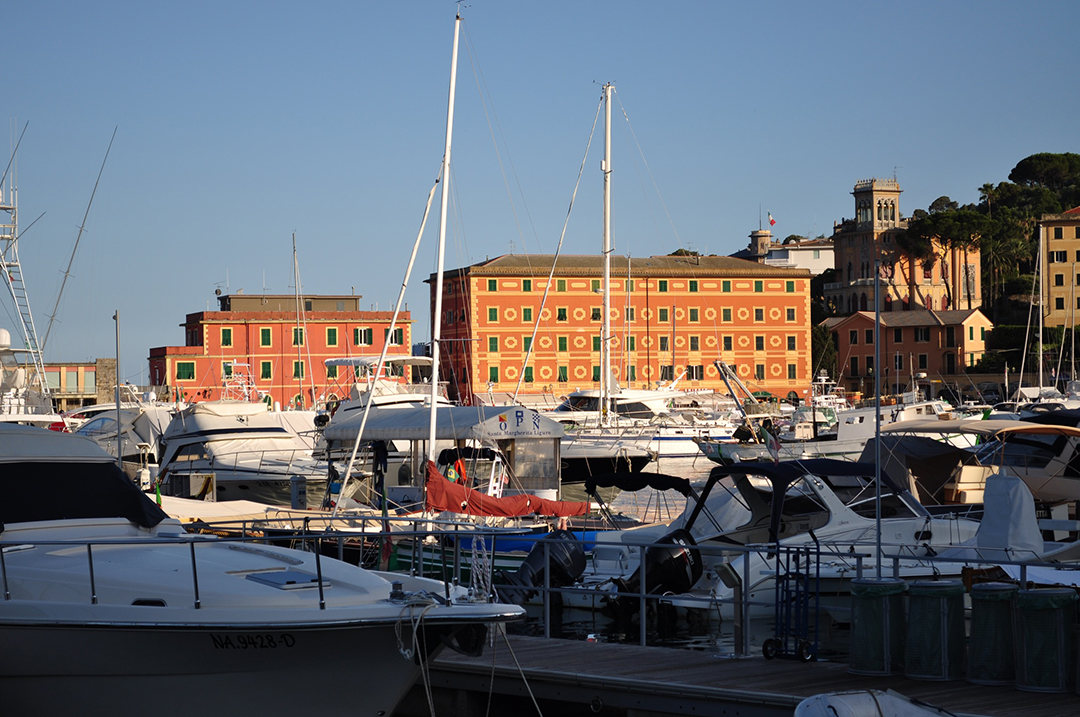 Start your visit from Piazza Vittorio Veneto, the heart of ancient Pescino, at the origins a tiny fishing village, now surrounded by beautiful buildings decorated in Ligurian style.

Head left along the seafront towards Piazza Del Sole, so named because it enjoys full sun from sunrise to sunset.
From here the view of the landscape of the coast from Rapallo to Sestri Levante is perfect.
Go back along Via Gramsci, a small pedestrian area dotted with shops in front of which stands the fountain of the Madonnina di Ghiaia celebrated in October by the inhabitants of the neighborhood, located just behind the imposing statue of Giuseppe Garibaldi.
Turn right under the arch of the homonymous alley to get to the Pinamonti bakery, renowned for its Genoese focaccia also with onions, which in all seasons attracts queues of gourmands waiting at the time of the oven.

Now come out in via Roma and head right on Viale Rainusso where you will take a short walk to the Parco del Magic Flute (formerly Carmagnola Park until 1998) among the imaginative creations of the artist Lele Luzzati in honor of Mozart.
Just in front of via Cervetti Vignolo takes you to the Oratory of S. Bernardo, inside works of art such as S. Bernardo in Cattedra and S. Lucia sec. xv, as well as a delicious recently restored wooden Madonnina.

Go down towards the center and stop in Piazza Mazzini, where the homonymous statue of the great Giuseppe Mazzini stands, and admire the beautiful facade of the Town Hall.
On the side of the square the Gelateria Gepi offers you ice creams produced with exceptional skill by Mrs. Ivana.
Here you are in Piazza Caprera dominated by the Basilca d Santa Margherita di Antiochia, inside which there are several 17th century Genoese school paintings, the wooden statue of the Guardian Angel and the shrine of the Madonna della Rosa on the main altar (in May the Very attended procession of roses).
On the right side of the church, the Seghezzo Brothers store offers a beautiful showcase of many of its sought-after food products, if you enter you will certainly find something special.
From here begins Via Cavour: get to the Macchiavello Wine bar where you can taste a glass of Ligurian PDO wine accompanied perhaps by original appetizers.
If you are still hungry, go to Pezzi, an old typical trattoria, renowned for its minestrone and farinata, but which also offers dishes at cheap prices!
In the parallel Via Cairoli you will find the Punto a Croscè shop where you can find lace worked as it once was and hand-embroidered fabrics as souvenirs.

Return to the gardens by the sea, past the Basilica, passing in front of the historic International Pharmacy (which sells cosmetics and remedies of its production) you arrive at the gardens in whose center stands the fountain of Christopher Columbus and on the pier of the boats the statue of Santa Margherita stretches out on the sea in a fantastic position.
Haven’t you eaten? Then go to Largo Giusti, near the Central Cinema, where you can taste the penguin specialty of the Central Ice Cream Shop or enter the Grecale bar or the Sunflower which will serve you delicious morsels together with the delicious aperitifs.

From Largo Giusti cross to go again in front of the Basilica, in the heart of the historic center, and start along Via della Vittoria, which leads you directly to the entrance gate of Villa Centurione Durazzo, a splendid example of Genoese Baroque and Italian garden dating back to the 16th century.
Then go up to the Villa itself located on the San Giacomo hill overlooking the Corte district from the magnificent terrace. The majestic noble floor of Villa Durazzo is rich in decorations and paintings by the Genoese masters of the century. XVII.

You can wander along the paths of the garden admiring the vegetation and then exit the small gate on the right side of the house and you are at the entrance of the Church of S. Giacomo sec. XVII.
Inside, the wooden statue of the Madonna of the Letter that legend has it came floating by sea even upstream from Messina in Sicily stopping right at the height of the church (the Virgin holds the Child in her arms and a missive in the other hand).

Valuable frescoes.
Go down the imposing staircase and here you are in the churchyard of the Oratory of S. Erasmo sec. XIV, recently restored.
Here you can visit the small interior where you can see the statue of the homonymous Saint (Sant’Elmo is the patron saint of the seafarers). of July.
Take the narrow lane at the Oratory to the Capuchin Church sec. XVII.
The monastery is still inhabited by a few but admirable friars who do their best for the needy (their soup kitchen is famous) and grow their own products from the garden.
From the churchyard, the view of the harbor and the entire Corte district is wonderful.

Nearby a Castle-Fortress was built by order of the Doge of Genoa in the century. XVI to defend against incursions by Saracen pirates. (see assault by the pirate Dragut in Rapallo)
The Castle now often hosts artistic events.
Returning to the sea you will find yourself at the Antica Pescheria; on the quay, between 16.00 and 17.00, you can watch, weather permitting, the return of the fishing boats with their load of fresh fish ready to be sold to the highest bidder.
With a little luck you could also see the famous red prawns of S. Margherita.

We are now in the heart of Corte, an ancient village of Santa Margherita Ligure, with many nice shops.