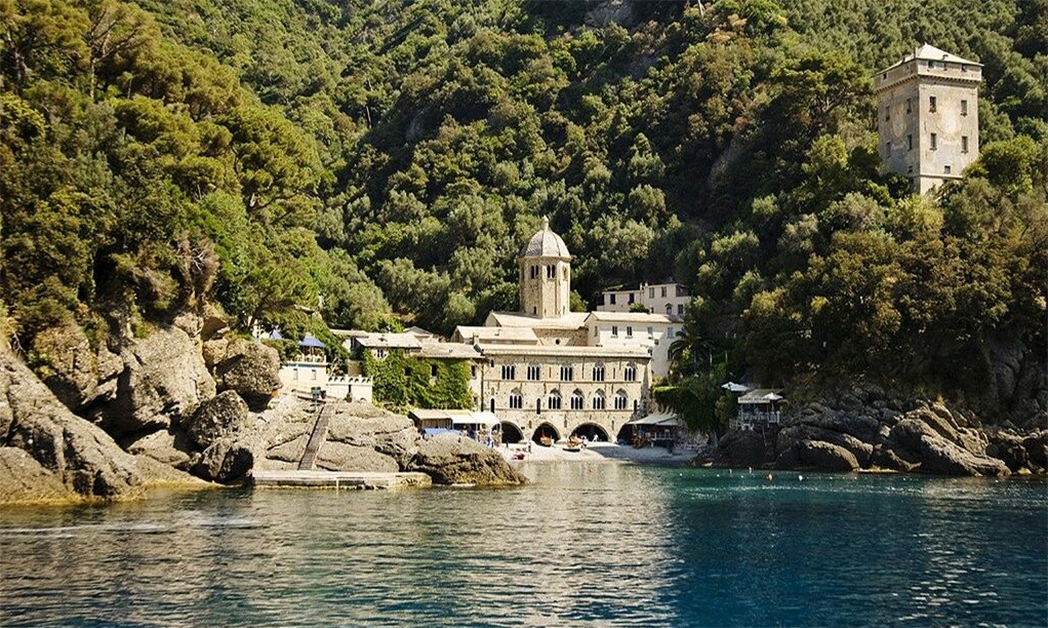 Excursion in the Portofino Park.
San Fruttuoso di Camogli.
The abbey is dedicated to San Fruttuoso of Tarragona, bishop and Catalan saint of the third century, whose ashes are kept in the abbey, where they would have been translated following the Arab invasion of the Iberian Peninsula.
The abbey cannot be reached by any road, but can only be accessed by sea or by taking two panoramic paths: one that descends from the above Portofino mountain and the other that runs along the coast starting from the bay of Portofino.
The abbey overlooks the opposite bathing beach.

The promontory of Portofino, which separates the Gulf of Tigullio from that of Paradise, is faces the sea, where, along with rocks, vegetation and old farm houses, creates an unforgettable show.The best way to reach the village of San Fruttuoso is to use one of many mule tracks (all very well marked) that depart from  Nozarego (after Church),  from Paraggi (at the bottom of the parking lot) and from the piazza della Libertà of Portofino.
The journey (trekking shoes recommended) proceeds through forests of chestnut, pine, old mills  witnesses of  intensive processing of farm products that have had their zenith in the eighteenth century.

The route (trekking shoes recommended) continues among chestnut woods, maritime pines, ancient mills and oil mills, witnesses of an intense processing of agricultural products that had their peak in the eighteenth century.
Addition “OLMI” in the heart of the Park we find ourselves choosing between two paths:
one (fairly easy) focuses on “Crocetta” and “Pietre Strette” and then quickly descends to San Fruttuoso;
the other (more demanding), of exceptional naturalistic beauty, stretches out over the sea, crosses the “Base Zero” and descends steeply to San Fruttuoso.

This village houses a magical abbey dating back to the year one thousand, owned by FAI (www.fondoambiente.it) since 1983 thanks to the donation of the owners Frank and Orietta Pogson Doria Pamphilj.
Periodically there are concerts of classical and light music and other initiatives promoted by FAI.

The environment of San Fruttuoso di Camogli.
The village overlooks the breast of San Fruttuoso, roughly triangular in shape, delimited to the west by Punta Torretta and to the east by Punta Carega, about 1 km away from each other. The summit of the bay is formed by two small inlets separated by the ridge surmounted by the Torre Doria.
The amphitheater in which San Fruttuoso lies consists of the steep slopes which descend, from the maximum culmination of the Promontory, Mount Portofino, home of the old traffic light, at 610 m a.s.l. at the end of the bay.

Around the Abbey there is a stony beach, the Torre dei Doria and a few fishermen’s houses that are reflected in the emerald blue sea where the famous statue of Christ of the Abyss is placed, placed in 1954 on the seabed and restored in the nineties.